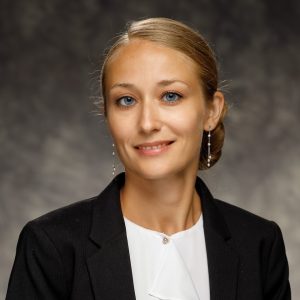 Yuliya Minets’s primary research interest concerns intellectual, cultural, religious, and social processes in Late Antiquity, with a major focus on the formation of and interactions between Syriac, Byzantine, Latin, and Coptic traditions of Christianity as well as their relationship with Greco-Roman polytheism and Hellenistic and Rabbinic Judaism.

Her first dissertation (Kyiv, 2011), supported by the Dumbarton Oaks Fellowship, analyzed the narrative strategies that Palladius of Helenopolis, an important early Christian writer, employed in his works, the Dialogue on John Chrysostom and the Lausiac History. It used reader-response criticism in order to explain why one author produced two such disparate compositions. The results of this study appear in the article “Palladius of Helenopolis: One Author, Two Ways to Write” in the Journal of Early Christian Studies (2017).

The PhD program at the Catholic University of America (2017) became an opportunity to expand the vision of Christianity through the study of the Syriac and Coptic languages. This raised her interests in the problems of multilingualism, language contacts, and linguistic identity in the past. Her first monograph, The Slow Fall of Babel: Languages and Identities in Late Antique Christianity (Cambridge, 2022), explores early Christian ideas about foreign languages, linguistic history, and linguistic diversity attested in literary traditions in Late Antiquity. The book is ultimately engaged with the question of how the arrival of Christianity changed the ways in which Mediterranean and Near Eastern elites experienced and conceptualized linguistic differences. It investigates how linguistic differences and language-related socio-cultural stereotypes were drawn into the process of constructing and negotiating distinctly Christian and specific confessional identities – the process which preoccupied many Christian intellectuals of the time, and which occasionally resulted in the creation of peculiar hybrid combinations as theological differences overlapped with linguistic distinctions.

Dr. Minets’s on-going book project – Shaping Letters, Shaping Communities: Multilingualism and Linguistic Change in Byzantine and Early Islamic Times – is an edited volume that explores various aspects of materiality and visuality of languages, multilingualism, speech communities, linguistic pluralism and change in Late Antiquity and the Middle Ages with a focus on the Byzantine and early Islamic Near East. By studying “the shape of letters” in a broader sense – namely, language peculiarities, sensitivities, choices, and strategies of language use reflected in writing – the international team of two co-editors and fourteen contributors seeks to uncover the history of elite groups and wider communities in these linguistically diverse regions and the ways in which their members expressed, performed, or ascribed their own or someone else’s religious, social, ethnical, or cultural identities. The book proposal has been approved by the editorial board of the Brill’s series Texts and Studies in Eastern Christianity.

Her articles “Languages of Christianity in Late Antiquity: Between Universalism and Cultural Superiority” in the Studia Patristica (2017), “Xenolalia in Christian Literature of Late Antiquity” in Language and Culture in Early Christianity: A Companion (2020), and several forthcoming publications continue to explore different aspects of linguistic ideas and language ideologies in the late Roman Empire and the Syriac Orient.

Her recent research has been supported by the Lindsay Young Visiting Faculty Fellowship at the Marco Institute for Medieval and Renaissance Studies (University of Tennessee, Knoxville, 2018), the Seeger Center for Hellenic Studies and the Committee for the Study of Late Antiquity (Princeton, 2018-2019), the Notre Dame Institute for Advanced Study (2019-2020), and CAH Professional Development Grants (Jacksonville State University, 2020 and 2021). She is a recipient of the Faculty Scholar Lecturer Award and the College of Arts and Humanities Excellence in Scholarly/Creative Activity Award (Jacksonville State University).

2022, forthcoming: “The Primordial Language in Ephrem the Syrian: Was it Hebrew or Syriac after All?” Hugoye: Journal of Syriac Studies 25.2

2022, forthcoming: “‘He Spoke to Him in Bulgarica Lingua’: The Curious Language Reference in Gregory the Great’s Dialogues.” Palaeoslavica 30.1