Dr. Goethals’ research centers on medieval and early modern literature and theater, focusing especially on gender and women's writing; the relationship between military-historical events and their literary representations across genres; the intersection of print, manuscript, and performative media; mysticism, prophecy, eschatology; and rhetoric. She is currently writing a book on the seventeenth-century Italian opera singer and prolific writer, Margherita Costa. Recent projects include a set of articles on Costa's burlesque writing and on her equestrian ballet libretto in its Florentine and Parisian contexts. Dr. Goethals has received long-term and postdoctoral fellowships from the Folger Shakespeare Library, Villa I Tatti—the Harvard University Center for Italian Studies, the University of Pennsylvania, and New York University, as well as grants from the Renaissance Society of America and the Gladys Krieble Delmas Foundation. She is also the Managing Editor of the scholarly journal I Tatti Studies in the Italian Renaissance. For issues and submission information, please see the I Tatti Studies homepage with the University of Chicago Press.

“Worth its Salt: Margherita Costa’s Ridiculous Defence of Buffoonery,” for Genre-Bending in Early Modern Performative Culture, special issue of The Italianist  40.3 (2020): 362-81.

Margherita Costa. The Buffoons, A Ridiculous Comedy. A Bilingual Edition. Edited and translated by Sara Diaz and Jessica Goethals. The Other Voice in Early Modern Europe. Toronto: 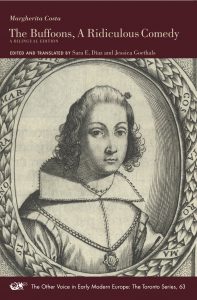