Professor Cheryl Toman participated in events surrounding the Concorsa Lingua Madre in Turin Italy, a national contest for immigrant women writers in Italy. A round table discussion for which Toman was an invited speaker was held at the Terra Madre Slow Food Summit, also in Turin September 22-26. Toman, who writes extensively on immigration in the Francophone world, discussed the importance of immigrant writings in the teaching of modern languages and cultures and described her ongoing research on the importance of food and tradition in texts written by African immigrant women writers. Toman co-directs a team of researchers (including colleagues at UA) looking at the Slow Food movement and its impact on the humanities. 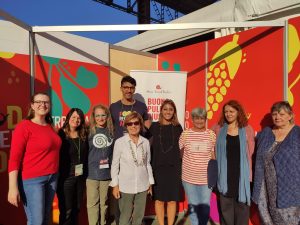