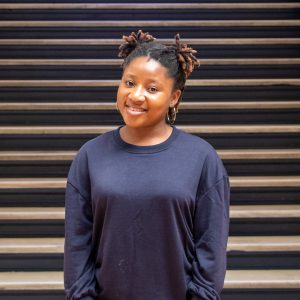 Originally from Akure (Nigeria), Oluwakemisola has always loved languages, hence her decision to study German. While at the university, she co-founded a language school in September 2016 and received a DAAD scholarship for a summer language course in Germany in 2017. Over this time, she developed an interest in second language acquisition and teaching. She then earned a bachelor’s degree in German from the University of Ibadan, Nigeria in 2019. The fall semester of 2021 makes it the second semester of her master’s program in German at the University of Alabama. She is also a Graduate Teaching Assistant and is excited to hone her teaching skills. Her interest in intercultural literature was informed by her experiences as a Nigerian in Germany and the United States. She loves meeting people of diverse languages and cultures and is especially interested in feminism, equal human rights, and global peace and relations She has been a member of the Delta Phi Alpha Honors Society since April 2021, and in September 2021, she became a member of the American Council on the Teaching of Foreign Languages. She aspires to become a professor of German whose major goal is to make language learning fun. She also has the intention of developing her language school into a center for cultural exchange. When she is not studying, you can find her trying out new recipes, conversing with friends, and watching movies.