Please visit my website for the most recent information: enhayes.people.ua.edu. Elizabeth Naranjo Hayes moved to Tuscaloosa from Columbus, GA to pursue her PhD in Romance Languages: Spanish and French Linguistics at The University of Alabama. Born and raised in San Diego, California, Elizabeth’s ancestors immigrated from Northern Italy and France to Mexico, and her parents immigrated from Mexico to the US.  She is a native speaker of both Spanish and English, a near-native speaker of French, and is proficient in all of the rest of the Romance Languages. She attended high school in Les Clayes sous Bois, France during 11th grade, and absolutely connected with the language and culture of her ancestry.  She speaks in French with her middle daughter, and in Spanish with all three of her girls.  Her husband is a true Southerner who has picked up a few words of her many languages throughout the years.  See pictures of them, below ☺ She taught at San Diego State University, where she earned her Master’s Degree in Spanish Linguistics, then she joined the US Army and was Commissioned as an Active Duty Army Officer at the 3rd Battalion 11th Infantry Regiment (OCS), Fort Benning, GA. After serving her country for a few years, she became the Director of a small k-12 accredited private school in Bonita CA (in San Diego County), until her husband joined the Army and they were stationed at Fort Benning, near his hometown of Columbus, GA. She taught at Columbus State University the seven years they were in Georgia, where she served as the Faculty Advisor for CHispA (CSU Hispanic Association), the Goizueta Scholarship Chair and Advisor, and was the CSU Liaison for the Muscogee County Hispanic Outreach Committee. While in Columbus, GA, she also taught at Georgia Military College’s Columbus, Milledgeville Online, and Global Online campuses, where she served on the GMC President’s Faculty Advisory Council and also as a college recruitment advisor and Hispanic outreach officer.   She still currently teaches at Georgia Military College online while at The University of Alabama. ​ In addition, she taught at the largest college on US Army Fort Benning: Central Texas College, serving her fellow Soldiers, Veterans, and their dependents.  Her proficiency in a wide range of dialectal varieties and registers was highly utilized as the sole interpreter for the Federal Court in the Middle District of GA for several years. Her mission in life is to create bridges across cultures through shared language, and she believes that the world will be a better place if everyone will learn just one more language. That way people would be able to talk to someone they otherwise never would have talked to ♥. ​ Pursuing her PhD in Romance Languages is a lifelong dream of hers, and she is ecstatic to be able to do so at the University of Alabama!  She enjoys Latin music, Francophone music, dancing, cooking, swimming, and having fun, but most of all she loves sharing her passion for language and culture with others. Her husband recently completed his MA at the University of Alabama and is currently a high school computer science and mathematics teacher.  They have a kitty named Chiquita Bonita "chee-KEE-tah boh-NEE-tah" (pretty little girl), and an orange kitty named Pote "POH-teh" (named after their favorite character in “Queen of the South”). 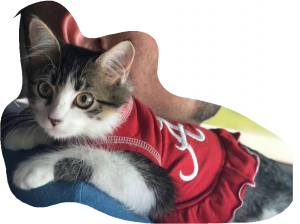