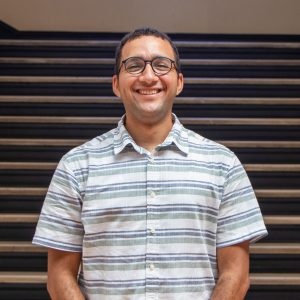 Ehab Alafifi earned his Bachelor of Arts in Spanish Language and Literature from Ain Shams University, Egypt. After his graduation, he was an intern at the United Nations Information Centre (UNICCAIRO). Professionally, he has 4 years of experience in teaching Spanish as a Foreign Language at the Ministry of Defense Language Institute (MODLI) in Cairo, Egypt. Ehab was a Fulbright Foreign Language Teaching Assistant (a Fulbright scholar) at Benedictine University in Chicago for the academic year 2019-2020. During his Fulbright experience, Ehab was a participant of the following conferences: 2019 Fulbright FLTA Mid-Year in Washington D.C and Conference Committee on Teaching about the United Nations (CTAUN) Conference at the UN Headquarter in New York City in February 2020. He is also a member at Library of Congress – Reading Room in Washington D.C. Personally, Ehab loves learning and teaching languages. He speaks 3 languages (Arabic, Spanish, and English) and is now learning Portuguese. Currently, he is interested in the dialectal variation between Latin America and Spain, Latin American Literature, and the history of the Spanish language. In his spare time, he loves reading about Hispanic American history in the colonial era.