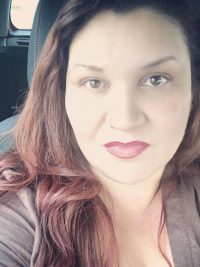 Please visit my website for the most recent information: https://enhayes.people.ua.edu/

Elizabeth Naranjo Hayes moved to Tuscaloosa from Columbus GA to pursue her PhD in Romance Languages: Spanish Linguistics and French at the University of Alabama.

She attended high school in Les Clayes sous Bois, France, during 11th grade and absolutely connected with the language and culture of her ancestry.  She speaks in French at home with her middle child, and in Spanish at home with all three of her kids.  Her husband is a true Southerner who has picked up a few words of her many languages throughout the years.

She taught at San Diego State University, where she earned her Master’s Degree in Spanish Linguistics, then she joined the US Army and became an Active Duty Commissioned Army Officer.

After serving her country for a few years, she became the Director of a small k-12 accredited private school in Bonita CA (in San Diego County), until her husband joined the Army and they were stationed in his hometown of Columbus, Georgia.

She taught at Columbus State University the seven years they were in Georgia, where she served as the Faculty Advisor for CHispA (CSU Hispanic Association), the Goizueta Scholarship Chair and Advisor, and was the CSU Liaison for the Muscogee County Hispanic Outreach Committee.

In addition, she taught at the largest college on US Army Fort Benning: Central Texas College, serving her fellow Soldiers, Veterans, and their dependents.  Her proficiency in 19 languages was highly utilized as the sole interpreter for the Federal Court in the Middle District of GA for several years.

Her mission is life is to create bridges across cultures through shared language, and she believes that the world will be a better place if everyone will learn just one more language. That way people would be able to talk to someone they otherwise never would have talked to.

Pursuing her PhD in Romance Languages is a lifelong dream of hers, and she is ecstatic to be able to do so at the University of Alabama!  She enjoys Latin music, dancing, cooking, swimming, and having fun, but most of all she loves sharing her passion for language and culture with others.  Her husband is currently a graduate student at UA as well.  They have a kitten named “Chiquita Bonita Hayes” who wears tiny “Roll Tide” cheerleader dresses, and a tiny orange kitten named Pote (after their favorite character in “Queen of the South”). Presenter: “A Comparative Acoustic Study of the /s/ in Coda in the Music and Interviews of 3 Top Colombian Music Artists.” The University of Alabama Languages Conference on 31 Jan – 1 Feb 2020.  Key topics: sociolinguistics, sociophonetics, phonology, dialectology, leveling.

Presenter: “Turn-taking by Spanish-English Bilinguals in the US. ” Mountain Interstate Foreign Language Conference at Auburn University on 10-12 Oct 2019. Key topics: conversation analysis, pragmatics, bilinguals in the US, turn-taking, and overlap.

Presenter: The number 1 and 2 Latin songs “Mi gente” by J Balvin, and “Dura” by Daddy Yankee to show the global cultural impact of Spanish music, especially in the US – Languages Out Loud 2018, CSU, 11 Apr 2018

Organizer and MC: “Breaking the Stereotypes” televised Open Diversity Forum and Potluck, a televised event by Loretta Rose Show, on 6 Apr 2018 that was open to the community

Published Article: “My Thoughts of DACA and Dreamers” published by The Courier / Eco Latino, featured on the front page and on pg 4 of the 3 Jan 2018 edition

Panel Member:  Loretta Rose Show “How do Women build each other up?” televised on 8 Nov 2017

Published Article: “My Thoughts of DACA and Dreamers: Insight from a CSU Professor” published by The Saber Magazine pgs 13-14 in 3 Oct 2017 edition

Presenter: “Bringing the World and Its Cultures to Columbus State University: Interactive Learning with Multimedia and Realia” for CSU’s We Solve it! Faculty Symposium 10 Aug 2016

Guest Speaker: “Why Spanish is a crucial life skill” at Shaw High School, Columbus GA, 10 May 2016

Honored as one of “The 20 most influential Hispanics in Columbus, Fort Benning, and Phenix City” – Front page of the Courier Eco Latino newspaper, Columbus GA, 4 Jan 2018

Professor of the Month – Lambda Psi Chapter of Delta Zeta of CSU, 11 Oct 2017

The University of Alabama: http://www.ratemyprofessors.com/ShowRatings.jsp?tid=2439165

The sociolinguistics and the sociophonetics of popular Latin Music

I love top Latin music and I would love to be the world expert on the sociolinguistics and the sociophonetics of popular Latin Music and its impact on the Spanish currently being spoken in the US!  I believe there is SO MUCH to unpack there, and I am excited to start working on it in my dissertation!

I teach through the songs on the Billboard Hot Latin charts, since it was one of my two Masters theses at San Diego State University! I showed that if you use the song lyrics to teach the grammar, the music to sing along and teach the pronunciation, the music videos to teach about the culture, *and have students move to the music* so they incorporate both sides of their brain as they learn a second language, it absolutely sticks! I have tested this methodology for the past MANY years I have taught, and it has *ALWAYS* worked, as you can see by my high ratings and students that happily leave bilingual and still singing along to Spanish music long after my course has ended!  I have created and copyrighted hundreds of creative, useful and silly infographics for language learning, many of which are available at https://www.teacherspayteachers.com/Store/Lengua-Es-Cultura.